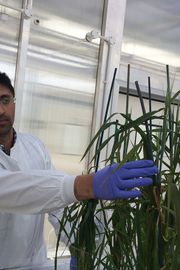 In the regions like Bangladesh, parts of the India and Nepal, where most of the water bodies are naturally and heavily contaminated with arsenic, the people are left with no option but to use the contaminated water to grow their food crops. In Bangladesh itself, 20 million people are affected with arsenic and it has been estimated that nearly 43,000 people die every year from arsenic poisoning.  Rice is the major crop grown in these affected regions and as compared to other crops rice accumulates more arsenic. Therefore, the people who use rice as their staple food are under the threat of arsenic poisoning.

A Medical and Life Sciences Research Fund bursary has been awarded to  Dr Mohan Thotegowdanapalya Chandrashekaraiah  working at the  Warwick University School of Life Sciences.   His project is entitled 'Development of a novel strategy to reduce arsenic accumulation in rice grains'.

Previous results from this research group, in model plants Arabidopsis and Tobacco showed that reduction in the plant hormone cytokinin improves the arsenic tolerance and accumulation. Based on this result, towards the development of safe crops currently the group are working on transgenic barley with reduced cytokinin in roots. In this project they propose to develop transgenic rice to specifically reduce cytokinin in rice roots to enhance the detoxification ability of the plant and to reduce the root-to-shoot translocation. With this proposed novel strategy, they expect to significantly reduce the accumulation of arsenic in rice grain. The added advantage of reducing cytokininin roots is they can make the rice tolerant to multiple abiotic stress like salt and drought stress. This approach also has future potential application to engineer the roots of aquatic plants for phytoextraction in order to clean up the arsenic contaminated larger water bodies.