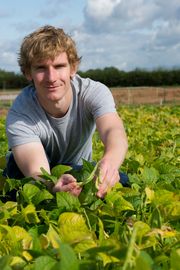 Adapting a staple food crop to the UK climate Common bean (Phaseolus vulgans) is the most important food legume for direct human consumption. Often described as the "poor man's meat", it is a staple source of dietary protein and nutrients for the urban and rural poor in developing countries in the face of scarce and unaffordable animal products. The nutritional value of beans as a component of a balanced, healthy human diet is recognised for promoting associated health benefits, such as helping to prevent cancer, diabetes and heart disease, as well as lowering choleslerol.

Common bean is also an important ingredient of the British diet, with people in the UK opening more than 1.5 million cans of baked beans per day. The main ingredient, the haricot bean, is not currently grown in this country; the UK consumer depends entirely on imports of dry common beans of all market classes. The haricot bean is nonetheless a potentially viable rotation crop for UK farmers, and home-grown beans could be attractive to consumers in Britain.

The Applicant's PhD research builds on work done by crop scientists at the National Vegetable Research Station in Wellesbourne (now the University of Warwick Crop Centre). They were adapting haricot bean for UK growing conditions. The current project is aimed at developing modern genetics and genomics tools to accelerate the process of adapting varieties to the UK climate. lt is anticipated that this project will eventually have an impact in providing UK farmers with a novel, short-season, legume break crop that would promote soil renewal and aid grass-weed control, and ultimately establishing a food supply chain for haricot beans in the UK, providing consumers with a nutritious source of home-grown vegetable protein.